In praise of Orlando City

Last Friday, Orlando City chairmen Phil Rawlins and Flavio Augusto da Silva announced that they would be funding the construction of their new stadium entirely with private money, and that they would be owning and operating the stadium themselves. With this declaration, they would forego some $20 million in tax dollars that Orange County had committed to the venue, as well as the $15 million that the city of Orlando had spent on reclaiming the land where the stadium would stand -- in addition to the $30 million in state funds that had become a major sticking point in the overall project.

When news broke that OCSC were set to make a major announcement regarding the stadium situation that afternoon, my initial assumption was that they would commence on the project without any help from the state, which would have still left the city and the county to prop up the rest of the building costs. So when Rawlins and da Silva proclaimed that they were going to build and run the venue using their own money, out of their own volition, I had to do a double take.

There's just no way that a pair of wealthy sports team owners would agree to finance the new stadium on their own, right? Especially in a town like Orlando, whose government's M.O. can be best summarized as, "we'll cater to every wish and whim of the developers and the tycoons, consequences to the locals be damned?" 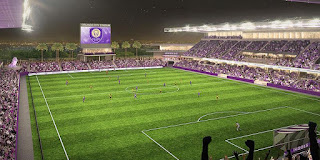 * * *
It goes without saying that I had been deeply, deeply critical of the original stadium deal involving OCSC. My beef with both the team and the city were threefold:

On one level, I perceived City's efforts to obtain public funding as yet another example of a sports franchise trying to hoist the costs of building a new and opulent venue on the man on the street, who would then would be priced out of going to the games once it opened.

On another level, both the city and the county had thrown $400 million at the Amway Center, on top of the $200+ million that was spent on the Citrus Bowl (which, it should be noted, would go back to hosting a handful of events a year again once City move into their new venue). It seemed unconscionable that they would continue that cycle with Orlando City's own ground.

On yet another level, it had laid bare Buddy Dyer's intentions and priorities as Orlando's mayor; his legacy would be cemented infinitely more by the millions spent on sports venues and entertainment complexes than by any meaningful improvements in the lives of those who called this city home.

Of course, the last bit still holds true to a great extent. Indeed, Dyer was quoted as saying that he would have simply given away the land for free had OCSC asked. But make no mistake here: This is a history-altering moment for the city of Orlando. In a town where the power brokers of the tourist industry and the local politics scene have long shown a complete disregard for people who live here, we finally have a pair of big wigs who actually seem to care about how the locals might benefit from their investments.

Credit must be given where credit is due, and both Rawlins and da Silva deserve high praises for making the kind of commitment that they've made to Orlando. There's a ton of goodwill to be had from assuming the full cost of the building a sports venue in a city that had just committed over half a billion dollars in public funds on stadiums whose main tenants are now playing in front of smaller crowds than in previous years. Even those who couldn't tell a soccer ball from a beach ball will have appreciated the co-owners' gestures.

On Mike Bianchi's follow-up column the day after the announcement, he wryly suggested that the pair's actions were Unamerican in the context of pro sports in America, where extorting cities for stadium subsidies, and threatening to pit their city against another if they're not forthcoming, is seen as being perfectly normal and acceptable. Perhaps it's fitting, then, that two men whose roots lie outside of the U.S. would be the ones to show that there's a correct, proper way to get a stadium built in this country.


* * *
In the hours immediately following Orlando City's presser, the Magic announced that they hired Scott Skiles as their new head coach. In obtaining the services of a former fan favorite and an old boy with a history of wearing out welcomes at every coaching stop, the DeVos family solidified to many the perception that they no longer strive for anything greater than adequacy for their team. Predictably, the move was panned by everyone other than the old-time nostalgists.

Their ambitions stand in sharp contrast to those of the still relatively-new soccer team. In just five years, City have all but supplanted the Magic as the alpha dogs in Orlando. Today, purple car stickers outnumber star-laden ones by an overwhelming margin. Sports-related talk at water coolers and dive bars increasingly revolve around the impact of Kaka, instead of the Magic's ongoing, seemingly perpetual rebuild. There's a palpable buzz about this fledgling side that hasn't accompanied the city's basketball team for years.

This is the truth about sports teams that share a hometown: They might be buddy buddies in public, especially on social media; but ultimately, they're competing with each other for the same money. There's a finite amount of dollars to be spent on entertainment in any given city, all the more so in a place like Orlando, which has the lowest median income of the 50 biggest metro areas in the US. Sports fans in this city will want to maximize the value of the dollars they spend, and will naturally gravitate toward the option which allows them to do just that.

The countdown to Opening Day is officially on again.
Author Kei Teay Time: 10:46 No comments: