What a 6-second sequence says about MLS

Take a glance at the following description of the events at RFK Stadium this past Wednesday night:

DC United registered a 2-1 comeback victory over Orlando City in the nation's capital. The Lions took the lead early in the first half via a Cyle Larin strike, and had managed to keep their goal advantage deep into the second. Kofi Opare eventually broke through for the home side, scoring on a header off of a free kick. The capital side eventually broke through for the winner after Kaka's giveaway led to a swift counterattack, culminating in an instinctive strike from Chris Rolfe in the six-yard box. The result left the MLS debutants with nine points after ten games, on level with Chicago and Toronto points-wise in the East, but with more games played than both teams.

Read through that recap again carefully, and a vital, yet previously unreported piece of information will begin to make itself conspicuous.

If the bit about Kaka's miscue caught you by surprise, then it's totally understandable. Neither the local papers or MLS's official website made a note of the incident in their match reports, even in passing. Only the Community Sports Report discussed Kaka's hand in DC United's goal at length, the day after the match (full disclosure: my friends host that show). Otherwise, both the local and national media remained mum on his role in what was ultimately a fatal error for City.

The error itself becomes all the more glaring when viewed through the following series of screenshots. I've never been a "watch endless streams of game film" type of guy myself, but the whole sequence involving the former Ballon d'Or winner made for a grim, yet hilarious viewing.

The first slide is timed at 78:25 on the clock (It starts at around 2:45 on this highlight reel). Here is Kaka receiving the ball a hop step from the halfway line. A teammate, Brek Shea, is in plain sight of him, and is poised to make a run on the left channel: 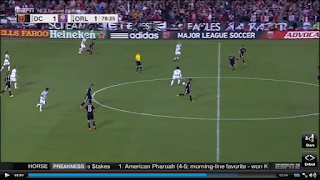 Seeing Shea in an excellent position to receive a pass, Kaka makes the obvious decision of trying to channel the mid-2000s version of himself. Here he is, running directly at two DC United defenders: Kaka then reverses course, shifting to his right and away from one defender... and straight into the path of the other. Undeterred, he still attempts to trick his way past his markers: 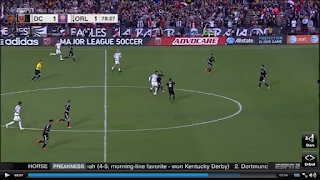 Had he succeeded, he would have created acres of space with which he could his Kaka things. Alas, this is 2015, not 2007. The move predictably breaks apart, and in an instant: 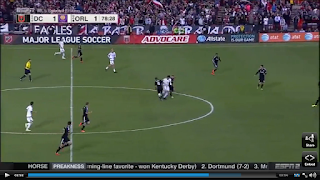 No sooner than he loses possession, Kaka starts howling at the moon, like a lonesome coyote on a desert night. Meanwhile, the men who took the ball from him are already shifting gears: 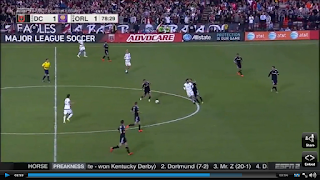 Our man is now facing away from the ball, solemnly strolling up the pitch, and possibly contemplating the meaning of life itself -- all the while not bothering to feign interest in getting the ball back -- as DC embark on a counter: 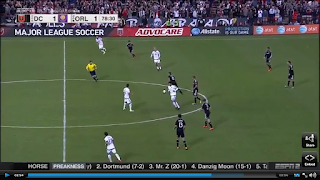 All of this took place in about a six-second window. If not for the events that followed, it might have been passed off as one of countless instances of a former sports icon trying and failing to draw ooh's and aah's from the crowd. Unfortunately, Kaka's lapse had grave consequences for Orlando City on the night.

Any meaningful attempt at tracking back, or even chasing after the pickpockets, might have made it easier for City defenders to recover, and consequently, more difficult for DC to pick out an incisive pass in the immediate aftermath of the turnover. Instead, his ponderous trot back into play resulted in every teammate behind him being left in a compromised position: 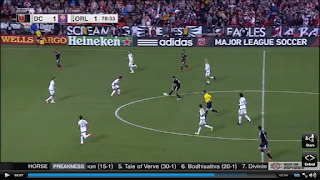 The entire movement, of course, concluded as thus: 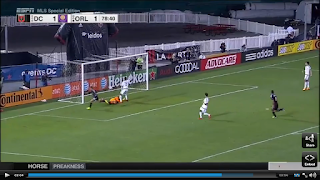 The sheer lack of damns given by Kaka throughout the sequence would be downright comical, if not for the fact that he is making over $7 million this year -- or, to put it in even more dramatic terms, some 100 or 150 times greater than what the majority of his teammates are earning over the same time frame.

It should be noted, again, that his original giveaway, and his lack of interest in making amends right away, went almost completely unobserved by both the local and the league media. For the Orlando Sentinel's part, its OCSC beat writer pinned it on a need to file the report within a very tight deadline. It seems a sensible enough rationale, except the write-up highlighted the inexperience of the defender tasked with marking Rolfe, as opposed to the blunder that left him and the rest of the backline in a bind in the first place.

As far as I can tell, soccer writers in America are reasonably knowledgeable about the game, and are fully aware of what's happening on the pitch -- certainly more so than me, I would hope. So it's unfathomable, then, that none of them could have picked up on that egregious an error, and lackluster an effort thereafter. That it was committed by the only player at RFK Stadium capable of commanding every spectator's undivided attention that evening merely reinforces that point.

It's difficult to shake off the feeling that the journalists and the pundits alike are reluctant to say one bad word about the likes of Kaka, Giovinco, and David Villa -- the latest, the shiniest, and most treasured golden eggs of a league which is ostensibly ushering in a new era of tremendous growth.

It's harder still to believe that the aforementioned match report wouldn't have contained the phrase "costly mistake" and/or "sloppy error" had it been made by anybody other than the would-be talisman of Orlando City (USMNT player Alejandro Bedoya implied as much in the hours following the game).

And it's nigh on impossible to imagine that such a play would have gone totally under the radar in an environment where every game actually matters, where every player knows the responsibilities and the consequences that come with every pass, every tackle, and every touch of the ball.

In any footballing nation worth its name -- pick a country, any country -- a team with all of two wins and nine total points after ten rounds would be talked about as an early candidate for relegation: a cruel yet just dessert for serving up a full season of mediocrity, or worse. The league setup in all of those nations is based on the idea that the best and most ambitious clubs deserve to rise to the top, while those that are stagnating (or flat-out decaying) should literally be brought down a peg or two.

Because of the insular and convoluted ways with which MLS operates, Orlando City, they of two wins and nine points, have a chance at making the league's playoffs, and competing for the league title, even after maintaining such an indifferent form for the entire season. Furthermore, because of the deeply-entrenched, and the occasionally scandalous privileges and protections that the American pro sports business model affords them, OCSC, along with every MLS franchise, are guaranteed top-flight status year after year, regardless of their performance on the pitch.

Considering these sets of realities, it might not even be surprising that miscues like Kaka's at midweek can simply be written off like meal expenses on a tax form. This is, after all, the rare top-flight [sic] soccer league whose setup is predicated on mediocrity by design. The likes of Orlando City need not worry about being sent back to the USL from whence they came, because no such threat exists in North America. Making matters even worse: the players have little incentive to exert maximum effort in every match, a direct result of having 60% of the league make the playoffs in any given year.

The men in purple have struggled to find consistency in the early goings, oscillating between earning impressive results and dropping points in devastating fashion. Their fans would have experienced reality checks these first two months, particularly the holdovers from their lower division days. But the MLS season still has over five months left to go. and there are many reasons -- seven million of them, to be more precise -- to believe that they could still reach the playoffs. Kaka may not be quite the maestro he was in his Milan heydays, but it must be of great reassurance for his teammates that they have the best player on the pitch on their side.

That fact alone, however, does not make him beyond reproach, let alone immune to criticism. To the extent that he is the face of the Orlando City franchise, and that he is being compensated rather handsomely to serve in that role, his every move on the pitch ought to be closely scrutinized, from both the fans and the media alike. He absolutely deserved a calling out for his personal debacle during his last outing -- even if the mainstream writers and talking heads felt otherwise.
Author Kei Teay Time: 23:52