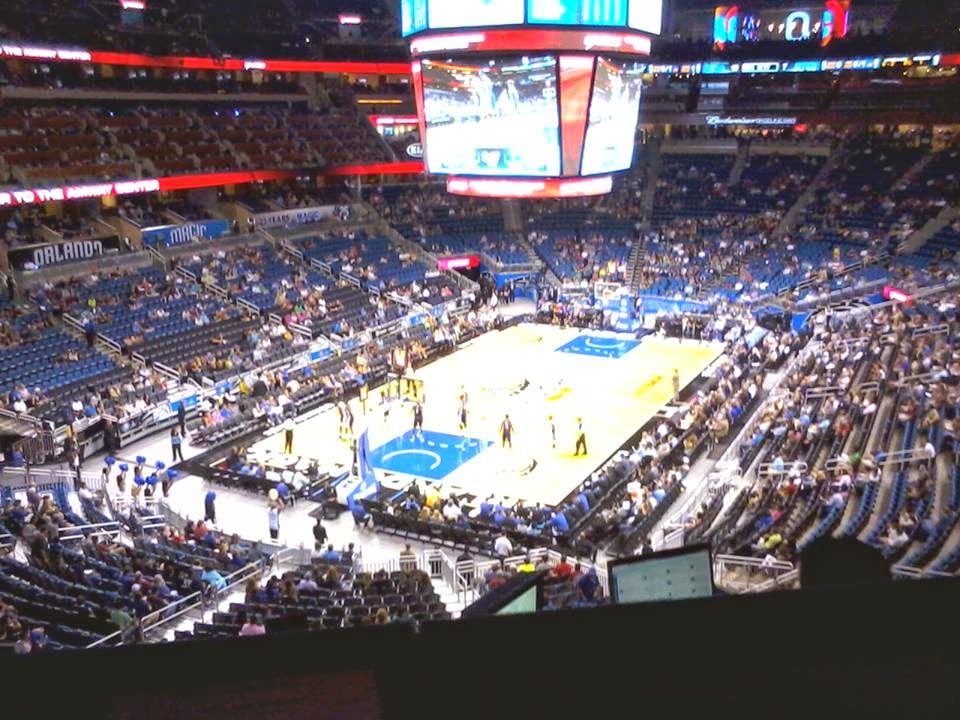 One of the most surreal experiences I've ever had at a sporting event lasted all of one minute, during a game that didn't count for anything in the standings.

I managed to snag a press pass at an Orlando Magic preseason game last year, and after trudging my way over to the media lobby on the opposite side from the main entrance, I took a short elevator up to the middle tier of the Amway Center. When the door opened, the first thing I noticed was the plush carpet that had been laid out on the entire hallway -- a setting that appeared more befitting of a business office than a big-time sports venue. My initial shock didn't last long, but only because I was quickly asked to show my credentials by a young, intern-looking dude who was rocking the sharpest tuxedo that I'd ever seen on a Millennial.

Without a hint of exaggeration, my initial reaction in those first few seconds was, "wait, is this a basketball game or a board meeting?"

After flashing my press pass at the absurdly well-dressed usher, I began making my way through the dimly lit millionaires' row toward the press area. Signs of opulence were on full display throughout the aisle. Water bottles and drinks were being sold at outrageous prices; team sponsors had their employees handing out brochures to passersby; and college-aged guys and girls were manning the entrances of club boxes, looking like bright-eyed rookie butlers waiting for their late-arriving masters to waltz into their favorite evening hangout spot.

Here I was, looking impossibly out of place in an oversize t-shirt and a pair of gym shorts, not even close to looking the part of someone who should have had a press pass (which, in fairness, I actually didn't), lumbering across the corridor which screamed exclusivity and indulgence at every turn.

That whole sequence, from when I first walked out to the elevator to when I reached the media section, took 60 seconds to complete. One minute of walking across one hallway. But in that short time frame, I got a far better insight into the 21st century American game day experience than I ever did during every sporting event I had attended up to that point.


* * * * *
Over the past 20 years, the overwhelming majority of professional sports teams in North America have either moved into brand new venues, or extensively renovated their existing facilities. And the overwhelming majority of these stadiums and arenas were either built or reconstructed using public funds. To hear the supporters of these projects in city halls across the continent tell it, everybody in town gets to share in the benefits of investing in these venues, regardless of each resident's passion for sports.

Even beyond the hysterically flawed logic behind funneling tax dollars toward sports complexes in the first place, that type of thinking doesn't take into account that so much of modern pro sports today is totally unrecognizable from what it was even a decade ago. It is a bona fide big business, in which all the power is concentrated within the locker rooms and at the conference tables. The game itself, at its most basic level, has been completely superseded by the pursuit of money, thereby relegating the fans to the status of mere consumers, whose biggest hope is being presented with a product worth supporting, both emotionally and financially.

To the extent that professional sports is a profit-maximizing operation, the teams and their owners are free to broker whatever deal that will bring in the most revenue, whether it's with their corporate sponsors or with the TV networks. Consequently, they're also free to market their overall product -- not just the actual team, but all the amenities and the luxuries that they have to offer away from the playing surface -- to whatever demographic they feel will buy into it, at the exact price they want to charge. The reality is that the competition for the last dollar is every bit as vibrant and vital outside the field of play as the struggle for victory is for the teams and players that we support.

On the other hand, that change in the sports landscape has undoubtedly screwed the average, hardcore, working class fans, not only in the short term, but especially over the long haul. New stadiums and arenas invariably result in more expensive seats, especially in their early years, when the proverbial smell is still fresh. The working man, in turn, is invariably priced out of the game, to be replaced by a more well-heeled yet only occasionally excitable crowd, at the venues their (our) own tax dollars helped to build. It's nothing short of an assault on our senses.

Equally as damaging for the die-hards: with new stadiums and arenas come a whole new set of expectations of what a game day atmosphere should be -- something which has less and less to do with the common fan with each passing home game. The entertainment and the experience on offer at sporting events nowadays are almost exclusively catered toward those who buy club seats, luxury suites, and most importantly, advertising space. It's not by any means an accident that the display ribbons and the scoreboards at the stadiums show the sponsors' logos and slogans 90% of the time; nor is it a coincidence that the kiss and dance cams almost always fixate on those sitting closest to the field; and it's no happenstance that free t-shirts are very rarely launched into the upper deck.

The rising costs of going to a game may not drive every deeply-committed sports fan out of the stands. The realization that they've been reduced to second class citizens in their own home venue, however, may well prove to be the last straw for those who still passionately back their teams in person.


* * * * *
With each groundbreaking ceremony, and with each red carpet ribbon-cutting event at a new sports complex, the average fans' chances of reversing the power shift in the politics of sports are diminished. The ticket prices (along with the costs of parking, concessions, and merchandise) keep rising steadily, even in the face of gargantuan television and media contracts. Teams across the country are building smaller, ostensibly more intimate venues, yet the cheapest seats are further away from the action than ever before. More and more is being made of empty seats at the games, but the teams and leagues can still easily manipulate the attendance numbers as they see fit.

Maybe the constant reinvention of the alternative sports viewing experience -- there are any number of apps and options on our smartphones and flat screens, after all -- will compel teams to rethink their strategy on filling those empty seats. Maybe a massive void will develop where the next generation of ticket buyers is expected to occupy it, further forcing those teams' hands. But realistically, how many years will it take before those things become a distinct possibility?

So long as the tickets keep moving one way or another, so long as the revenues keep flowing in from every conceivable stream, so long as the cities and counties can be shaken down for taxpayer-funded stadiums, and so long as the value of every franchise continues to zoom headlong toward the stratosphere, the status quo of professional sports does not need changing. This is a very worrisome trend indeed.

Live sporting events are one of the few outlets left in today's world where people of all stripes can scream, shout, cheer, and celebrate their cause -- their team -- without a hint of shame or reservation. We can't afford to lose this, too.