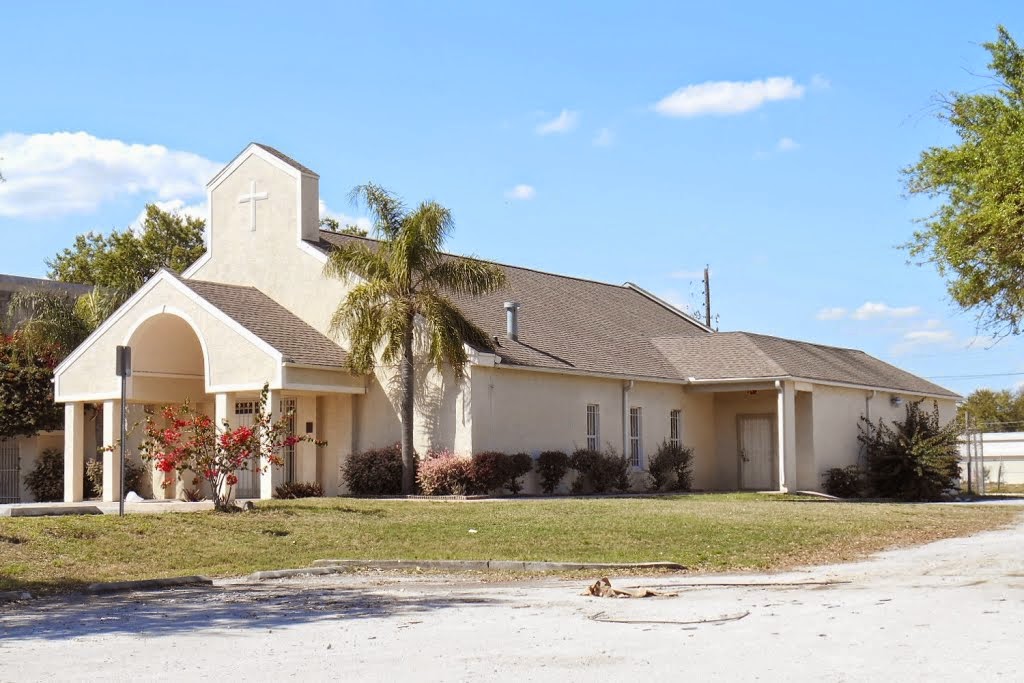 The most recent edition of ESPN the Magazine contains an illuminating article by Mina Kimes on the stadium saga involving the city of Orlando, an MLS-bound soccer team that calls it home, and a small community church in the heart of town. The long and short of it: The city of Orlando agreed to build a new, publicly-funded soccer stadium for Orlando City SC in the Parramore district, and used eminent domain to snap up all necessary parcels of land for the project -- except for the one which houses the Faith Deliverance Temple. The negotiations to buy the property went nowhere, so the city is moving ahead with another ED claim. The church leaders are willing to take the battle head-on, though the odds are stacked against them gaining a favorable outcome.

There's precedence for this type of action by the city of Orlando regarding the construction of a sports venue: Buddy Dyer and co. also used eminent domain to seize properties for the Amway Center, a far costlier venture for the locals than the soccer stadium. The end game, however, remains the same: The proverbial man on the streets will have to shoulder the costs of building a new, opulent stadium where the super-rich of Central Florida -- execs at Disney, big hitters at Full Sail, head honchos at any one of the major hotel chains in the tourist areas -- can be pampered inside their luxury suites at sporting events and live concerts, from which most of the residents of this region will be priced out.

This, of course, is nothing new here. The city and county governments sank millions of dollars into the Citrus Bowl over the years, and is now bankrolling a whole new set of renovations at the stadium. Even the old Orlando Arena, the former home of the Magic, was paid for, in large parts, with public funds. Given those bits of info, it doesn't seem totally implausible to think that one of the reasons why Phil Rawlins, the owner and president of Orlando City, moved his team here from Austin, TX, was because he saw a local leadership which had a penchant for corporate welfare, and which would raise no serious questions regarding his aspirations of joining MLS, preferably at a cut-rate price.

This blog has questioned the wisdom of Orlando (and Orange County) committing hundreds of millions of dollars toward building new sports venues before, especially at a time when parts of the city are breaking apart at the seams, and its downtrodden residents are continuing to fall through the cracks. The city has long ago dropped any pretense of having the interests of its residents at heart, which begs the question: have the Orlandoans themselves woken up to this reality?

If the comments in Mina Kimes' article are anything to go by, the congregants of the church certainly appear to have done so. The pastor's widow did not mince any words about the city's handling of the negotiations, going as far as to say that the powers-that-be "just want to throw us out." There is also a sense of resentment about how the Amway Center saga went down, a controversial project perpetrated on behalf of the billionaire owners of the Magic, a family that walked back on their deeply conservative political views to beg for, and receive, a taxpayer handout to the tune of $400 million for the new arena.

It's easy to get hyped up about something like sports, about a game like soccer, in a city like Orlando, especially when the local soccer team is poised to make a dream move to the big leagues. It's easier still to disregard the consequences of the city's efforts to brand itself as a big-time sports town. Those sentiments were expressed directly to me, from one of the regular attendants of the church, over a brief series of tweets: 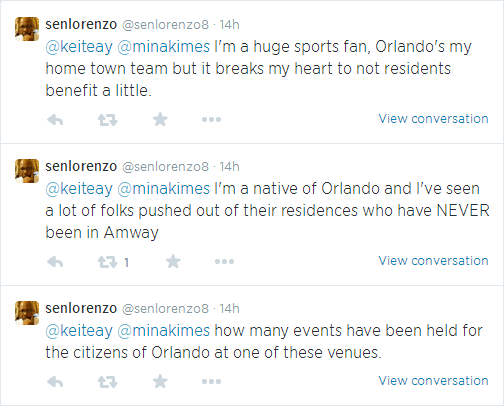 Eminent domain may have its place and purpose if it is being used to build a hospital, a school, a police or fire station, a transit center, or a highway -- all things that serve the public good. But using it to build sports venues, which will ostensibly be owned by the public, but will only benefit the owners of teams which would call them home?

The Sports-Industrial Complex, like any good old-fashioned industrial complex, only serves to benefit the few at the expense of the many. These boondoggles come in a variety of sizes -- $100 million-plus for the OCSC soccer stadium, $500 million for the Amway Center, an estimated $11.3 billion for the World Cup in Brazil, an eye-watering $51 billion for the Sochi Olympics -- yet there is a common thread in each of these cases: Nary a peep is made about the collateral damage that the people who manipulate the system leave in their wake.

Orlando City will begin MLS play next season, playing their home matches at the newly renovated Citrus Bowl while the stadium saga continues to boils over. They have already served notice to the rest of the league by signing Kaka, a Brazilian superstar and a former Ballon d'Or winner. Robinho, his compatriot and a fearsome player in his own right, may soon join him in Florida. The excitement about the team appears to be building by the day. One could even make the case that Orlando is a soccer town now, particularly in light of the Magic's descent into irrelevance.

The story of OCSC's meteoric rise to the top flight, however, is not one of an underdog club who built themselves up the "right" way. They cannot parrot the "started from the bottom" line about their growth without irony. One only needs to look at the increasingly sordid ordeal centered around a humble church on the city block to shatter those conceptions into pieces.
Author Kei Teay Time: 03:40 No comments: