I had the privilege of attending Wednesday night's Magic-Rockets game, courtesy of Juan, who got a pair of tickets only ten rows up from the court. I had been to all of two games the entire season -- the opener against New Orleans, and the Kyrie Irving show about a month later -- and saw this as a perfect opportunity to make it three.

We actually took in the same matchup at the same venue the previous year, as I personally didn't want to miss out on the rare opportunity to watch Jeremy Lin play in the flesh. Last year's Houston squad also had the lure of Chandler Parsons, who made his name at Lake Howell, then at Florida; plus James Harden, who arrived via a sign-and-trade in the summer, and was already looking like a top-tier player. The Rockets, as expected, won that night, and went onto have a solid season which culminated in a playoff appearance. By all accounts, they were another big name away from becoming a legitimate title contender.

They wound up getting their man in the offseason. On Wednesday night, that player would be the sole focus of almost everyone inside the confines of the Amway Center. 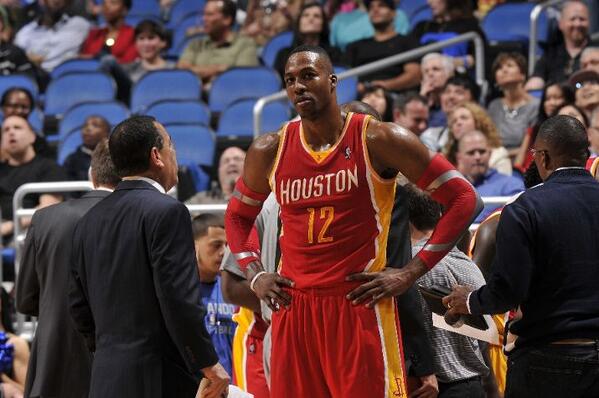 * * * * *
Mention the name Dwight Howard to Orlando Magic fans -- they still exist, believe it or not -- and the chances are, they'll drop at least one F-bomb before they finish the first sentence of their response. A year and a half has passed since the trade that sent him to the Lakers, but the wounds here are almost as fresh as they were when the deal was first announced. Only a handful of souls in town have found it in their heart to forgive him for exiting stage left, especially in the manner that he did.

Otherwise, the resentment for the would-be Superman still runs rampant among the Magic faithful. This is hardly a surprise; in many ways, the franchise has been defined by the acrimonious departures of their best ever players, and its fanbase by the deep grudges they hold against their former idols. Penny Hardaway and Tracy McGrady rarely received positive receptions during their returns to Orlando. Ditto Grant Hill, after he left for Phoenix following an injury-ravaged spell with the Magic.

To this day, fans, sportswriters, and radio talk show hosts rail against Shaquille O'Neal, who played a huge role in putting Central Florida on the basketball map in the first place. Nearly a full generation since his own move to LA, his departure still stings with a surprising degree of intensity among a sizable element of the Magic's supporters.

Howard's first game back at the Amway Center might have been the most anticipated civic event of the 2013 calendar year in Orlando. The build-up to the opening tip featured precious little humor to be had at his expense; it immediately turned into a very thinly-veiled hate fest. Boos and jeers began pouring down like a late-afternoon sun shower from the moment he was introduced as a starter, and continued with his every touch of the ball. The sold-out crowd kept the onslaught coming, hoping that the sheer noise and hatred alone would drive him completely off his game.

Dwight also happened to dismantle the Magic that night. He ended up producing his best performance as a Laker, scoring a season-high 39 points, and ultimately getting the last laugh as his team walked away with the victory. That represented the high point of his lone season on the West Coast; by July, he was on his way to Houston to team up with the budding young stars on the Rockets squad.


* * * * *
Which brings us to Wednesday's clash. The hype machine had once again billed Howard's return as one of the most important dates on the city's calendar. The hate fest, while not as persistent or virulent as last year's, was still enough to compel the more hardcore fans to tear off their bandages and rip open the wounds caused by Dwight's flight. As with last year's showdown, the crowd was baying for blood, with the performance of their own team being relegated to secondary status. As with last year's showdown, the torrent of boos and abuse came hailing down on Number 12.

Yet, from my vantage point not far behind the sideline, there were any number of differences from last season's return game. Some were plainly obvious, such as the fact that Howard had changed teams. He was also allowed to do something, anything, with the ball during last night's game, whereas he was hacked and prodded and needled on his way to 39 free throw attempts the previous year.

The most noticeable changes weren't actually on the court; rather, they were more about what was happening in the stands. For one, for as hotly as the game was promoted by anyone in Central Florida with a microphone, it didn't exactly translate into a busy night at the box office. Juan and I walked into the interior of the arena shortly before the intros; the first thing I noticed was the vast swathes of empty seats.

I was taken aback by the sight. It was always a given that the attendance at Magic games would suffer, in the midst of a second straight lost season for them. Still, considering that they were playing hosts to one of the premier teams in the league, which just happened to have public enemy number one among Orlandoans on its roster, I was expecting to see every seat in the building being filled (the announced attendance was actually lower than what it was for the same matchup the previous year). For another thing, the Magic had been running a silver anniversary campaign all season, celebrating the finest moments in the franchise's history. One of its defining features has been the airing of a brief highlight video for visiting players who had previously played for the team; there was one for Earl Clark at the Cavs game I attended, for example.

The news that the Magic would run a similar video for Dwight at the game was met with considerable consternation in Orlando. Some fans even wondered why they would even do so much as recognize him in the first place, much less honor him with a highlight reel. The franchise itself may have forgiven the old number 12 for his sins; obviously, it was a totally different story for those who used to wear his jerseys and cheer him on.

Juan and I spent the entire first quarter wondering when that video would be shown. Finally, as the teams huddled before the start of the second stanza, the montage flickered onto the big screen over our heads. To the surprise of absolutely nobody in the NBA universe, the crowd immediately began voicing their displeasure. While the boos weren't quite as loud as they were whenever Dwight touched the ball, they were audible enough to be commented on by any observer in the stands.

Being a contrarian (and a wind-up merchant) that I am, I took a totally opposite approach. As soon as the first dunk flashed onto the screen, I stood up and applauded Dwight. As far as I could see, I was literally the only person within the 50-feet radius who gave him a standing ovation; there were far more people staring at me instead, no doubt wondering why this random guy in their section was showing love to a player who was the basketball equivalent of Brutus to them. One of them was a kid who, funnily enough, was wearing a #12 jersey with the name "Howard" on the back.

A standing ovation, a simple gesture for a man who played a vital role in reviving -- and some would even say saving -- professional basketball in Central Florida, had become tantamount to trolling for those in attendance. It was as clear a sign as any that Magic fans, at least those who were in the building, were still years away from finding peace with Howard's ultimate exit from Orlando... assuming, of course, that they actually would.


* * * * *
By far the loudest cheers of the night came in the middle of the fourth quarter, when the Magic were making a late effort to claw back into game, and found themselves down by only three. Dwight set himself on the right hand side, directly in front of us, with the Magic's Kyle O'Quinn guarding him. Howard rose up for a hook shot; O'Quinn, timing his own jump to perfection, swatted his attempt from whence it came.

This sent the crowd into a frenzy. They could already sense the momentum swinging towards the home team; witnessing a monster block, on their arch-nemesis's shot, no less, led to them discovering an extra octave in their voice that hadn't been present before. In the bigger picture, it gave them an extra bit of hope that the Magic could finally serve Howard a piece of the proverbial humble pie that he so richly deserved.

Of course, there would be no storybook ending for those wearing blue and white. A cold-blooded jumper by Harden on the ensuing possession propelled the Rockets into their own late run, allowing them to build a lead that they would never relinquish. Half the stands were deserted by the final media timeout, with the outcome having been decided at that point.

Both teams emptied their benches out shortly before the final buzzer. The villain of the piece trudged slowly off the court, looking like a warrior who had found conquest after an arduous battle.

The Rockets eventually won the game by the score of 101-89. From a pure basketball standpoint, it was a reflection of the state of both teams -- one trying to launch itself into the realm of the elite teams in the NBA, the other simply trying to conjure up the next savior that would lead it back to relevance.

From a more personal, emotional standpoint, it was the confirmation of a reality that most Magic fans were scarcely willing to accept: Dwight Howard would once again get the last laugh in a city he deserted two years ago. The jilted basketball lovers he left behind in this corner of Florida would have to wait another year to try and find revenge.
Author Kei Teay Time: 06:48