Is Psy just a one-hit wonder? 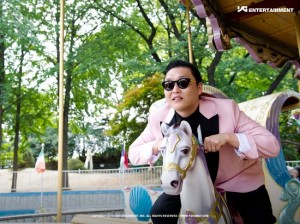 In a little over a month, Psy has gone from being virtually unknown outside of Korea to becoming a worldwide phenomenon. His music video for "Gangnam Style" is fast approaching 300 million views on Youtube (as of September 24), and consequently, spawned a truly global viral movement, mostly based on his outlandish dance routine. Psy, for his part, has since parlayed that whirlwind success into a near-constant stream of media appearances, showing up on morning talk shows and award ceremonies to perform to an audience that suddenly can't get enough of him.

His meteoric rise from relative obscurity in Korea has everybody wondering when he will show up next to put on his moves; he has hardly shown any signs of burnout from making so many rounds in so little time. It has also led to increasing talk about how he can possibly follow up this act, and in the (much) bigger picture, how others in the realm of K-Pop can expand their fanbase outside their homeland, particularly in America. Those are very good questions to ask in the wake of Psy's runaway success; and with a small but passionate Asian pop fanbase already in place in the States, there is a possibility that other entertainers in Korea, and the other major East Asian nations, could pursue opportunities here.

But at what cost?

Going off of his Wiki entry, as well as internet searches of his name, it seems Psy has built his career on being somewhat of a maverick in the Korean entertainment industry. His biography describes him as becoming a household name in his native land by adopting an irreverent and satirical style of prose and routine, in stark contrast to the more meticulous, refined ways of a typical K-Pop (and for that matter, any pop) artist or group. The video that launched him into superstardom would appear to have been scripted and played out based on those characteristics.

"Gangnam Style," Psy's satirical portrait of conspicuous consumption in South Korea, is certainly an extravagantly made music video. Behind the over-the-top depictions and the borderline ridiculous gyrations, however, there is a distinct purpose to every word, every shift of the body, and every background change. It's an inherently relatable track, if we all took the time to do a little research on it (or even just look up the lyrics on Google).

Then again, nobody in the mainstream media appears to have done any of that. There was precious little mention of the message behind the video during the first month of the phenomenon; everyone outwith the most curious onlookers was content to let the man do his horsey dance.

This is the paradox of "Gangnam Style": Even as the song has become a mammoth hit around the world, it has simultaneously been reduced to a dog-and-pony show among people who have come to enjoy it so much. As charismatic and talented as Psy may be -- he does pull off a great dance routine for someone in his mid 30s -- it seems clear as day to me that his newfound fame in the States is not due to his craft and character that he has developed over the years, but rather, because he has simply developed the dance move du jour. 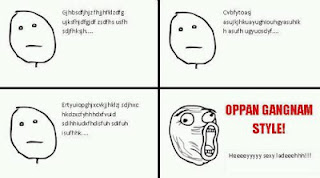 Both the artist and the media are milking out this movement for all it's worth, and the craze over the pudgy, Asian dancing sensation shows no signs of abating. But we live in an era of short-lived fame and glory, and even shorter attention spans. Eventually, America, along with the rest of the world, will have its fill of "Gangnam Style." The media attention (and the view count on Youtube) will begin to taper off, before going into a steady decline. The parody videos will become few and far between. At some point, it will go the way of the Macarena -- too eccentric to become mainstream, but possessing enough staying power to remain in everybody's minds.

That point could come a month from now, six months from now, or even a year from now. But what then? Can he possibly keep the carton from running completely dry? Or will this be the first, and last, impact he will ever make on the world stage?

That, of course, only deals with the immediate, short-term response of his run atop the entertainment world. There are more serious questions to be asked about the long-term future of not only Psy himself, but for other superstars of the K-Pop (and other Asian pop) world, and even for Asian entertainers in America:

1. Could he possibly parlay the opportunities he has received via "Gangnam Style" into something even bigger? He's now under contract with the same record label as Justin Bieber, but it's rather difficult to see him reaching anywhere near the same plane of success as the track that brought him here.

2. If he really does end up being a one-hit wonder, how will he be remembered? This has as much to do with how record executives decide to handle other stars from Korean, and the broader Asian industry: if his success brings about more talented imports from East Asia, then he may well be remembered as a pioneer. If that doesn't happen? At best, he would be a mere trend-setter; at worst, he's Ken Jeong with a dance move.

3. Perhaps most worrisome for Asian entertainers: is this really what it takes to become a global entertainment icon? Psy built up a modest, if not sizable, following in Korea over a decade, yet it wasn't until he hopped on a horse and busted a couple of moves that he began commanding the attention of the entire world, not to mention the kingmakers in the music industry.

How should groups like Big Bang and Girls' Generation, both more popular in Korea than Psy, react to his sudden explosion onto the scene? What about other leading entertainers like Rain and Jay Chou? The fact that Psy has already achieved more global acclaim with one music video than those big-name stars have in their entire careers (the latter two even starred in Hollywood movies) should be more than slightly disconcerting if you're a fan of Asian entertainment.

4. What impact will the Psy phenomenon have on Asian-Americans? His rise is a double-edged sword for the most under-represented group in America in terms of media appearances: none of us would begrudge him his success, but do we really want to put him on a pedestal and hype him up as an example of what we want our pop stars to be like?

Even if the answer to that question is yes, it's highly doubtful that Psy would be truly adopted in the AA community. At the end of the day, he doesn't make much of a societal impact beyond going on Ellen and Today Show. He's not smashing any stereotypes or setting any new standards for performance. This isn't Jeremy Lin coming out of nowhere and capturing the imagination of the whole nation, all the while galvanizing an entire community. This is an entertainer who made his fame outside the US, who's capitalizing on a fad which has nothing to do with those of us who are here.

This may strike you as an overtly cynical view on Psy's ascension to the mass media throne, but at this point, it's naïve to expect everything to go as planned in this fickle, impulsive entertainment industry. Caveat emptor applies to the artists as much as it does to record companies and its consumer base; they're only of use to the execs as long as they produce hits, and the audience only tolerates them while their material is fresh and catchy enough.

Psy is receiving plaudits left and right at the present, but it's unrealistic to expect him to remain relevant as a one-trick pony forever. Either his handlers allow him to show his wider range of talents, or they'll simply reduce him to a tired circus act, only to be brought out for nostalgia's sake. Either way, it's unlikely he will ever reach his peak popularity once his hit song loses its spice.

Then the focus will shift on whether he, and the rest of his colleagues in the East, can continue making waves in the West.

That is, if they actually get an opportunity to do so.
Author Kei Teay Time: 12:29 No comments: