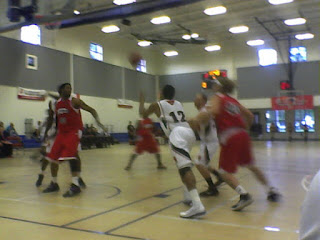 The Magic's season may have come to its merciful conclusion weeks ago, but professional basketball is very much alive in the city of Orlando. There's a new team in town, and it has replaced the Magic -- at least during the summer -- as the only basketball show in Central Florida. The Orlando Venom, part of the International Basketball League (hereby referred to as the IBL), have set up shop in the Winter Park Rec Center; and neither the team nor the league have anything on their NBA counterparts in town, they have nevertheless produced a small, but rather passionate, following during its first season in existence.

I have been in attendance for a handful of games so far, courtesy of some generous ticket arrangements with those connected to the team. They have yet to win a game on their home court, but each outing has been very entertaining and enjoyable from my point of view, regardless of the score. I've taken the liberty of live tweeting these games (get at me, ninjas) in recent weeks; this is the first time I've rounded one up in a summary form. So here is the running diary from the Venom's most recent matchup, on Saturday night against the Portland Chinooks:


6:50pm: Leaving for the Rec Center. If I end up in the emergency room tonight, just assume I've caught a severe case of IBL FEVER.

7:08pm: Got to the Center just in time for the opening tip. Free entry to the game secured via [name redacted for obvious reasons]. I look to the left and see a sea of empty seats; there are maybe ten people sitting courtside, as well as behind the basket. Spoiled for choice, I was indeed. Ultimately, I settle for a seat right across the Venom bench.

7:17pm: Already seeing a barrage turnovers and missed layups from both sides. Secretly hoping that this one doesn't go overtime, even though only three minutes of actual game time has passed. By the way, Juan (aka 407 Hood Legend) has the line at Portland -12.

7:30pm: The Venom dancers come onto the court during a timeout. Their routine, or rather, the execution of said routine, screams DTF.

7:32pm: Just spotted one of the players texting -- yes, TEXTING -- while a Portland player shot free throws. Welcome to the IBL!

7:34pm: Venom up 26-22 after the 1st quarter. Portland has missed at least eight chances at the rim, though. Juan suggests via Twitter that the visitors could be shaving points; they're not being very subtle about it if that is indeed the case.

7:44pm: Alex and his Lake Howell boys are in the building. No Chandler sighting, however, as he's in a Caribbean island according to his Twitter account. Plus, I don't think an NBA player would stick around for this type of game for more than a quarter, but that's a whole 'nother matter.

7:52pm: Midway through the 2nd quarter. Iren Rainey, a key contributor for the Pedro's Posse last season, has caught fire for the Venom. There's one guy in the gym who's caught IBL FEVER tonight!!!

8:00pm: Portland missed a fast break dunk on their last possession of the half; they pay for it dearly as a Venom guard (can't even remember his name) drains a 3 at the other end. Orlando goes into the locker room up 58-53.

8:05pm: The dance team's halftime show consists of half a song; I applaud them off the court, anyway. By the way, I asked about this during the previous game, but what's the proper etiquette when watching these dancers on the floor from courtside? Do I just look at them sideways, or simply eyeball them the whole time? Keep in mind that I've already noted these dancers as being, ahem, more than slightly suggestive.

8:14pm: Winter Park mayor, per the team guide: "We are proud to host this "world-class" basketball league at our new facility." So there you go, there's another key figure on the Venom team who has come down with that FEVER.

8:27pm: Second half is under way, and the Venom are actually playing some useful, productive basketball. They build a double digit lead, and get Portland into early foul trouble. In fact, they've had five personals and a tech called on them in the opening three minutes.

8:36pm: One of the Venom guards gets the play from the coach in the half-court. He promptly jacks up a 25-footer that had absolutely no chance of going in. Meanwhile, Roodz has asked me what the f*** kind of game I'm watching; that's actually not a bad question at all.

8:44pm: These fans sitting courtside appear to be particularly passionate about the Venom. I'm assuming they're related to someone on the team, whether it's a player, a coach, an exec, or a dancer. Either way, their dedication to this team is rather admirable.

8:47pm: Down 13 points earlier, Portland has come all the way back to take the lead. Remember that useful basketball the Venom were playing earlier? Yeah, me neither.

8:51pm: Entering the 4th quarter, and this one is tied at 87. It's a shame no TV or radio station is covering this, because this game has a potential for an outstanding finish. ESPN might be a step too far for a league like the IBL, but it could certainly do with a wee bit more exposure.

9:01pm: Both teams are in double-figures with 7 minutes to go. Venom up 3 points. This might be the ugliest high-scoring game I've ever seen.

9:07pm: I can only imagine what the atmosphere here would be like if they sold beer at the concession stands... there's a decent chance both teams might have been heckled out of the gym by now.

9:10pm: It's now a matter of which team will make fewer mistakes toward the end. Venom still leading 108-107 with 4 minutes to go. Looks like this one's coming down to the wire; can we get Bright House Networks to set up a camera or two?

9:14pm: Actually amazed that the Venom have led almost the whole way, considering how morbid they've looked at times. It's almost like they're trying to run an And1 offense, only without tricks and dunks. No way they'd put up more than 40 points against an NBA team over 48 minutes, even against the Bobcats. Anyways, back to the game.

9:18pm: Chernobyl-style meltdown for the Venom down the stretch. A missed three and a missed jumper, both taken almost immediately after they crossed half court. Meanwhile, Portland hit two free throws, then got a putback (following a missed alley-oop, no less) on the other end. Venom now trailing by four.

9:20pm: Another awful three with plenty of time on the clock. No choice but to foul the Portland player on the rebound; he calmly hits both free throws. Venom down six... cue the late Don Meredith.

9:22pm: Portland 119-113 Orlando final. The summary of the final minutes: the Venom completely froze down the stretch, and all but opted to hand the game over to Portland on a silver platter, with the salt and the pepper at the ready. Strangely enough, that was the exactly same score as the previous night, except the visitors had led most of the way. Dropping either of these two games would have been a huge downer for them, considering the trip; they probably didn't stay at the same hotel the Blazers stay in when they come down to Orlando.


So that may not have been the most intriguing advertisement for the Venom, and the IBL as a whole, but pro basketball, at any level, is entertainment first. And you certainly get your money's worth of entertainment at Venom games, for better or worse.
Author Kei Teay Time: 13:56