Shinji Kagawa: The next great hope 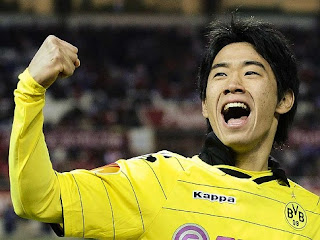 This year's German Cup final afforded Shinji Kagawa with quite possibly the biggest platform he has ever been presented during his burgeoning career. A sellout crowd on hand at the Olympiastadion in Berlin; a matchup against Bayern Munich, the most successful club in the nation; an expectant Dortmund fanbase eagerly awaiting their club's first ever league-and-cup double; an adoring legion of fans in his homeland anticipating the kickoff well into the midnight hours. And just for good measure, one of the most iconic managers in football was in attendance, presumably to watch his every move.

The stage had been set for Shinji Kagawa to deliver a spectacular performance -- and deliver, he did.

The Japanese maestro wrote his name on the scoresheet less than three minutes into the match, a slot-home finish after a defensive meltdown from Bayern allowed him to slip past a couple of defenders. He then notched an assist in the latter stages of the first half, sliding in a gorgeous pass to the onrushing Robert Lewandowski, who simply had to poke his effort past the keeper. His fingerprints were also on Dortmund's first goal after the break; his foray inside the Bayern half and layoff to Kevin Grosskreutz eventually led to Lewandowski's second goal of the match (he would get his hat trick in the dying minutes).

It was the perfect sign-off to another superlative season for the Kobe-born playmaker. He had become a household name in the previous season, bagging eight league goals during the first half of the campaign, including a brace in the derby match at Schalke. An ankle injury kept him out for most of the latter half, but the expectations for Kagawa, as well Dortmund, were sky high going into 2011-12.

His response? No less than 18 total goals, with 13 coming in the Bundesliga, plus 11 assists, which easily could have been more. He was an unstoppable force from January to March, tallying eight league goals in nine matches. Those contributions were essential in Dortmund taking home their second straight league title, and after today's emphatic win over Bayern, the first league-and-cup double in club history. All this, from a player who was virtually unknown outside of Japan less than two years ago.

If his first season in Germany was about gaining respect in the football community, his second one was geared toward adding to his reputation, a mission he was wildly successful in completing. It is natural, then, to wonder how much more he is capable of accomplishing in the coming years. He only turned 23 in March, which puts him in an ideal spot as a professional athlete: a bona-fide, established player who is still years away from hitting his prime. Not surprisingly, his future has been a subject of considerable discussion among fans and pundits alike.

Some of the biggest clubs in football have shown an interest in signing him during the summer, most notably Manchester United. In fact, Sir Alex Ferguson made an appearance in Berlin for the match, taking time off from preparing for a potential title-deciding clash against Sunderland the next day. If he was there to watch Kagawa in action -- and it would hardly take an educated guess to arrive at that conclusion, given the rumors -- then he will have left Germany with an indelible impression of the player.

It is still much too early to tell whether Kagawa will be wearing red as we kick off a new campaign in the summer, but very few would argue against his credentials. With his penchant for scoring goals and making decisive passes, plus an innate understanding of where and how an attacking play will unfold, he could very well become an important asset for Sir Alex's side next season.
Author Kei Teay Time: 06:53